The Whiz Mob and the Grenadine Kid by Colin Meloy is a whimsical adventure full of tongue-in-cheek humor and a whole lot of twists and turns. When Charlie’s mother abandons him, he finds himself suddenly traveling the world with his diplomat father whom he hardly knows and never sees. They are currently in France and Charlie is bored. One day while sitting on a bench with his notebook, a boy comes up and steals the pen right out of Charlie’s hand. The boy is so sneaky that Charlie doesn’t even know it’s happening! Charlie is so intrigued that he begs the boy to teach him the ways of pickpocketing, and thus gets pulled into the fast-paced, high stakes world of the whiz mob: a group of kids who make their living stealing from the rich. 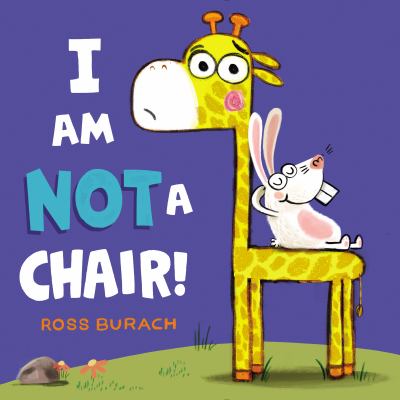 Here’s a super funny story about giraffe’s first day in the jungle, when all the other animals think he’s a chair! After a full day of being sat on, giraffe has had it. He’s just about to tell the next animal he sees that he is not a chair, when along comes lion and boy is lion hungry! Read the book to see what happens after that! Hint: It’s hilarious! Try reading this to preschoolers or kindergarteners  and see if they can spot the turtle at the end of the book.

Absolutely Alfie and the Furry Purry Secret by Sally Warner is the first book about Alfie, who is the younger sister to EllRay Jakes, which is another series for young chapter book readers. Alfie is a little nervous about starting 2nd grade, and not looking forward to her forced playdates with a neighbor girl, Hanni, who she has heard can be a bit bossy. The girls actually have fun together. Then Hanni’s family gets a bunch of kittens and they’re just giving them away! For free! Alfie can’t resist, even though there’s a family rule: no pets allowed. That’s because Alfie is allergic. But Alfie thinks the rule is wrong and she just knows she can handle taking care of a kitten on her own. She just has to keep it a secret. What could possibly go wrong?

is a fun early reader book about two brothers who also happen to be great friends. They go to a neighborhood party that has a surprise twist, come up with a plan to make money, and invent a new bedtime ritual that just might get better with time. They are good at detecting “lumps” and waking them up early in the morning. If you enjoy Charlie & Mouse, there’s another book, too. Charlie & Mouse & Grumpy is all about the weekend of fun the brothers spend with their grandpa.