On Sunday, March 10th at 2:00 AM, we will join most of North America and Europe, and parts of the rest of the world in “springing forward” and turning our clocks an hour ahead. Popular lore often attributes the one hour shift in daylight to farmers, but the reality is much more complicated. Benjamin Franklin is credited with the modern notion that a time change would save energy, though William Willett, a British builder, formally introduced the idea to the British Parliament in 1908. One year after Willet’s death in 1915, Germany and the Austro-Hungarian Empire were the first countries/states to officially enact Daylight Saving Time as an effort to save energy during World War I.

In the United States, The Calder Act established Daylight Saving Time and U.S. Time Zones on March 19th, 1918. The law was officially repealed in October of 1919, though many states and cities did not follow suit, creating a great deal of confusion until Congress passed the Uniform Time Act of 1966.

On March 6th, 2019, the Florida Senate passed the Sunshine Protection Act, aimed at keeping Daylight Saving Time all year, instead of reverting back to Standard Time from November to March.  Currently, American Samoa, the majority of Arizona, Guam, Hawaii, Northern Mariana Islands, Puerto Rico and the Virgin Islands do not participate in Daylight Saving Time.

Don’t forget to set your clocks one hour ahead! 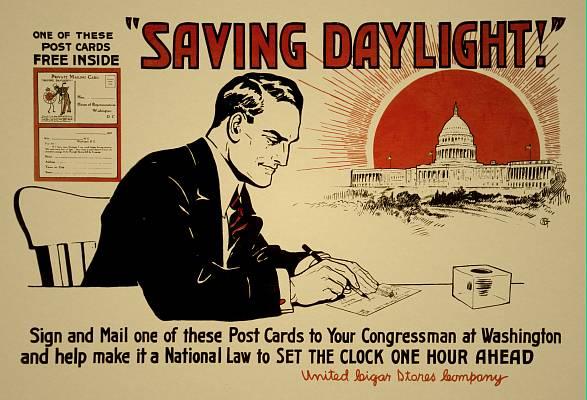 Photo from Library of Congress